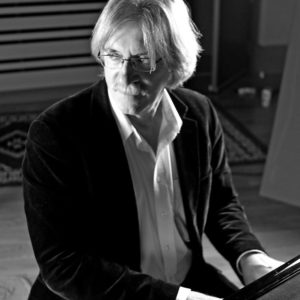 Posted at 18:27h in Uncategorized by admin
0 Likes

William Morgan ‘Bill King’  (pianist, composer, publisher, producer) was born on June 22, 1946 in Jefferson, Indiana, U.S.A. He devoted much of his time as a youth to studies with W.C. Handy’s former pianist Eva Smith, the Louisville Academy of music’s Don Murray, and Indiana University saxophonist/educator Jamey Aebersold. By the early ‘60’s, he had won 16 first place awards in classical piano and clarinet competitions and a scholarship to Oscar Peterson’s Advanced School of Contemporary Music- (1963) and a scholarship to Berklee School of Music in Boston (1964).

King began his career performing with local community orchestras and big bands in New York, in 1966. He was a member of The Shadows in 1966 when they had their first Billboard Top 50 hit with jazz pianist’s Bobby Timmons gospel romp, ‘Moanin’, a successful stint which led to King working with many of the stars of the day including The Shangrilas, Dick and Dee Dee, Freddy Cannon, The Dovells, and Ronnie Dove. He opened for The Beach Boys on three occasions, and appeared with the Dick Clark Caravan of Stars. By 1968, King had moved from Greenwich Village (where he been house pianist at Louie Jordan’s) to Los Angeles to become Linda Ronstadt’s Music Director and Pianist. A year later, he joined Janis Joplin’s band in the same capacity.

King relocated to Toronto for the first time in 1969, signing a recording contract with Capitol Records who would release two albums over the next few years (‘Goodbye Superdad’ and ‘Dixie Peach’) with King as leader. He returned to Los Angeles in 1976 as Music Director for vocalist Martha Reeves. While on a European tour with Reeves, he was persuaded to join The Pointer Sisters and spent the next year touring Japan and the U.S as their Music Director. He moved back to Toronto permanently in the late ‘70s to form the rock group Kearney, King, and McBride (later known as ‘China’) and recorded a self-titled album for Epic/CBS.

By 1984, after a year-long stint with Ronnie Hawkins and The Hawks, King launched his first independent jazz label known as Night Passage Records, recording several successful albums on that label over the ensuing four years. He also issued one release on Gaia Records (‘Magnolia Nights’).

During the mid ‘80s, King began a career as a jazz broadcaster first at Toronto’s Q-107 and Q-Jazz, then creating ‘The Jazz Report’ which ran for almost three years at CIUT-FM, then nationally as ‘The Jazz Report Radio Network’ which was heard in 26 cities from 1989 to 1991. Bill also hosted and produced “Jazz Preview” a weekly show on Jazz FM for 4 ½ years. During that time he also produced and engineered Joe Sealy’s duets as well as acting as co-producer for Jazz FM Sound of Toronto series. In 1987, he established a parallel career as a publisher and record company president with partner Greg Sutherland, founding ‘The Jazz Report‘ Magazine. The duo went on to begin the Radioland record label in 1992, signing a major manufacturing and distribution deal with Verve/Polygram Canada a year later.

Bill King has also been a driving force in the success of The Beaches International Jazz Festival in Toronto, serving as the festival’s Artistic Director since its inception in 1988. He was also Artistic Director during the short-lived Toronto International BBQ & Blues Festival. King started the National Jazz Awards in 2001 to recognize outstanding contributions by Canadian jazz musicians.