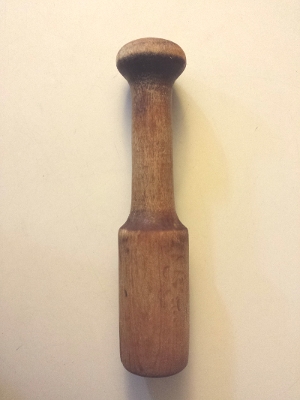 Garlic has had a checkered past in many places around the world. Toronto food writer James Chatto tells an intriguing story about his father’s love/hate relationship with garlic. He recalled how his British father hated garlic but loved curry, which sometimes was made with garlic. “He never included garlic as an ingredient when he made his own curry, but when he ate curry made by others, he liked the taste, even though he knew there was garlic in it. My family would teasingly remind him of the ingredients…turmeric, cumin, ginger, cardamom…garlic. It amused us every time to watch him enjoy a curry made with garlic while at the same time holding such disdain for it.”

In an example from late 19th Century Paris, world-famous chef Auguste Escoffier contrived to hide his use of garlic from the most famous actress, Sarah Bernhardt. Once a year, on her birthday, Escoffier prepared her favourite dish: his scrambled eggs. His ingredients were simple, but his method was sublime. He slow-cooked the eggs over low heat for half an hour while stirring it in a bain marie. This ensured well-aerated eggs, more like a custard in texture than a simple scramble. He never revealed his secret flavour, though: Escoffier stirred the eggs with a clove of garlic pinned on a fork. He realized that if Bernhardt, a self-described garlic hater, knew his secret, she’d never again eat his eggs, so Escoffier held his garlic close to his chest for all the years he knew her.

Stories like these point to something interesting: garlic has such strong negative associations that it precludes some people from appreciating its taste. But why do they have such a strong aversion?

Their anticipation affected their flavour perception—an offensive idea  led to a bad taste. Why did James Chatto’s father hate garlic but loved curry made with garlic? Why wouldn’t Sarah Bernhardt have eaten Escoffier’s eggs if she’d known they were cooked with garlic? And how is this connected to historical prejudices toward garlic? The answer lies in understanding the role of taste and flavour in human evolution.

Humans taste food using thousands of receptor cells on the tongue. The sensation of taste is made up of five categories: sweet, sour, salt, bitter and umami. This information is conveyed to the brain along with other factors, including texture, temperature, coolness, heat and, most important, the sense of smell. The totality of these sensory inputs, along with memories and associations, is what constitutes the flavour of a food item.

In early humans, the ability to form memories associated with taste served a different purpose than it does today. In hunter-gatherer cultures, a sweet-tasting food meant high sugar. High sugar meant high energy, and this offered a better chance for survival. A bitter taste signaled a potential poison. Sweetness meant life, while bitterness meant death. The ability to remember a sweet-tasting berry versus a bitter-tasting plant helped ensure our survival.

Jump ahead a few thousand years to modern civilization. The  ability to make associations and form memories around a taste or smell took on a different purpose. As humans divided into strata according to economic or social criteria, a system evolved to mark these classes. British social classes, for example, were distinguished largely through language and pronunciation. A person’s social status could be determined from childhood by his accent. Pronunciation as a class marker exists in many places in the world, even in Ontario. In nineteenth-century Toronto, Spadina House was pronounced “spa-dee-na” by well-heeled, mostly Anglo-Torontonians north of Bloor. It was pronounced  “spa-dye-na” by the immigrant population to its south, largely Italians, Jews, Poles and Ukrainians. What further distinguished these Europeans from their neighbours north of  Bloor? For the most part they were garlic eaters and they were literally described as such and never in a positive way. Why and how garlic became associated with lower social economic classes throughout the world, from the Ainu people of Hokkaido to Italian immigrants in Canada, is connected to the ease with which garlic could be grown in most climate and soil conditions compared to other more valuable spices. It became the poor person’s spice. Or, as Toronto Chef Curt Hospidales recalls, growing up in Trinidad, “Garlic was the meat in the pot.”

Negative cultural stereotypes around garlic prevailed in Ontario throughout the 20th century. In 1928, a meeting of the trustees and teachers for a school near Sudbury debated whether students who smelled of garlic could be admitted to class. “The question of whether or not we could send pupils home if they ate garlic, arose. It was decided that we could.” This was not an isolated incident. Jean Gural, who attended a religious school in Norfolk County in the early 1940s, remembered a similar experience in which she was  given a garlic-related ultimatum: “In the town of Boston, Ontario (now called Waterford), the school I attended brought in spiritual singers. I wanted to attend Sunday school so I could participate. My parents were farmers; they never got dressed up. It was a chance for me to wear a dress and fancy hat and carry a purse. But there was a problem. My Sunday school teacher—I can’t remember her name, she was prim and proper, well dressed—said to me, ‘Jean, don’t eat garlic if you come to Sunday school.’” Gural refrained from eating garlic on Sundays. All these years later Jean attends the Toronto Garlic Festival where her son, JP, is a garlic vendor (Samsara Fields). Jean says, seeing all the people from so many cultures attending the Toronto Garlic Festival and enjoying garlic dishes together gives her a “feeling of vindication.”

Image above depicts the garlic masher brought in suitcase from Ukraine in 1922 by grandmother of Sudbury resident Mary Stefura.

Text excerpted from “Ontario Garlic: The Story from Farm to Festival” (2015 History Press)