Claims about garlic’s medical and therapeutic effects in ancient lore and modern science can fill a book. It can boost the immune system, reduce blood pressure, reduce the chance of heart disease, protect against cellular damage via antioxidants and is effective against Alzheimer’s disease and dementia. Since prehistoric times, people have used garlic to treat physical and mental illnesses. In ancient India, garlic was a commonly used medication. The Codex Ebers (1550 BCE), an Egyptian medical guide written on papyrus, prescribed garlic as a treatment for abnormal growths. In Europe, medical practitioners used garlic throughout the Middle Ages. St. Hildegard von Bingen, the Abbess of Rupertsberg and a leading physician in late twelfth- century Germany, wrote that raw garlic is more effective than cooked garlic. Clearly, she understood that garlic—or what we now know as allicin, a chemical it produces—is heat sensitive.

Ancient camel caravaners had the right idea when they preserved meat by drying it with salt, garlic and red peppers, mashed and rubbed in. We know that garlic has proven antimicrobial effects in meat.  Canadian garlic farmer Bob Baloch told how his great-grandfather saw one of the last of these caravans in the late 1930s. “They were coming from modern-day India via Tharparker Desert and going to Persia, Iraq and beyond.” Baloch’s aunt tried making the preserved meat with garlic and salt when he was a child. He recalled his mother saying that it didn’t taste very good. “But if it’s your only form of protein when you’re crossing the desert, it was acceptable.”

Many ancient beliefs about garlic’s medicinal benefits continue to be followed in the modern world. A ninth-century doctor in Baghdad used garlic as an effective treatment for ear infection. His cure included eleven cloves of garlic along with lovage, pine oil and Persian verdigris. One thousand years later, an Ontario woman tried a similar cure. The May 1895 Ontario Medical Review records a patient’s complaint as told by Dr. Murray M’Farlane. She complained “of great pain and giddiness. Upon examination with a speculum, I found the auditory canal of each ear completely blocked by hard pieces of garlic, which had been inserted on the advice of a friend who extolled its virtues in restoring hearing. Mrs. W——had followed this advice and entirely forgotten about the garlic, which began to swell, causing intense agony and dizziness.” M’Farlane not only cured her infection but also helped her overcome her habit of using of garlic as a medical treatment. From that time on, “garlic was banished from the medicine chest forever.”

Many other ailments have been treated for centuries with garlic, right up to twentieth-century. During the 1953 polio epidemic, Canadian haberdasher Harry Rosen wore garlic cloves—wrapped in cheesecloth and tied with a string—around his neck. Rosen recalled that his mother and Polish grandfather believed it would protect him from infection at school. This was not a new practice. In fact, people have long used garlic as a medical prophylactic, whether worn, carried or hung over a doorway. Doctors in eighteenth-century England carried garlic in their pockets to ward off the odour of disease.

Toronto chef Dinah Koo remembered her parents’ remedy for a cold she caught as a young girl. They applied a poultice—made with crushed garlic wrapped in cloth—directly to her chest. Koo said that the remedy was passed down from her great-grandparents in Canton, China. Evidence suggests that this was not a cure dating back just a few generations. In fact, garlic has been used for medicinal purposes in China for at least three thousand years. Ancient garlic wisdom does not always survive the cultural leap of immigration.

Farmers’ market manager Cookie Roscoe recalled as a child her mother ignoring garlic advice from their neighbour, “Dido” Lysik (Dido means “grandfather” in Ukrainian). It was fall, around 1970, Roscoe recalled. “Mum was doing the last of the garden for the year—dusty, hard work that she’d put off, but it was getting too cold and snow was imminent. She sat me in a corner on the ground for only a minute while she tore out the dead tomato and bean plants and threw them on the compost pile. I had a runny nose and was a cranky child, which is what he saw. I think he may have been teasing her about leaving the garden so late before noticing me.” And what did Dido Lysik recommend to Cookie’s mother? “Rub garlic on the soles of her feet.” Roscoe’s mum, her British sensibilities fully intact, replied, “Thank you kindly for the advice. It’s nothing that a good night’s rest won’t set straight.” Dido Lysik leaned over the fence, staring down at them like a pharmacist at a dispensary counter. “Take her socks off. Cut a garlic clove in half and rub the halves on the side of her feet.” Roscoe’s mum was intent on getting her task done and wasn’t interested in his advice. But Lysik stepped up the pressure. “If you love your daughter, you’ll rub garlic on the soles of her feet.”  It seemed to work on young Roscoe. She recalled looking at Lysik’s arched brow and then at her mother, wondering, “Hmmm…maybe my mother doesn’t love me.” 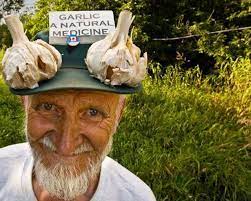 Is it the panacea some make it out to be? Some of what we read or hear in the media may not be true. To help understand this better, let’s step back and look at the big picture. There’s an unspoken collusion between scientists, mass media and the general public. The academic dictum of “publish or perish” can lead some scientists to publish shoddy work. And scientific journals are increasingly willing to publish material that’s not always well researched or that may be compromised in some way. Once published, this dynamic is reinforced by mainstream news editors. They regurgitate dumbed-down versions of these studies for the general public, further clouding their worth. Editors prefer positive stories about a new health benefit to draw readers. People of every age and walk of life are eager to read about and buy into the next new health fad. This effect is compounded by online news sites, where “clickbait” strategies rule. Stories are favoured not for accuracy but to raise a website’s search engine ranking and advertising revenue. How can we make sense of all the claims about garlic? There are a few things to consider.

It’s important to understand how the research was conducted. It matters if a garlic study is done in vitro (in a test tube) or in vivo (in animals or humans). In vitro studies are performed in a controlled environment—test tube or petri dish—outside of a living organism. Although convenient and less expensive than experiments conducted on humans or animals, they do not replicate the exact environment of the human body. For example, there are in vitro studies that claim that garlic lowers cholesterol. Yet in vivo studies conducted do not produce the same result. In vitro and in vivo studies in humans often differ in their results. Why? One reason is digestion. The human digestive system is very good at breaking down food into the parts required for human survival, but it’s not perfect. In garlic, for example, medically beneficial properties we can see in vitro do not survive in the harsh environment of the human gastrointestinal tract. They’re not able to get to the part of the body to have the benefit that’s observed in vitro.122 Nevertheless, newspapers and health journal editors take in vitro studies at face value. They gleefully report that garlic may be beneficial for a particular human condition or illness. Paying attention whether a study was done in vivo versus in vitro can help you distinguish fact from theory.

Who Paid for the Research?

Garlic and Other Alliums The Lore and the Science, by Dr. Eric Block

More and more research is paid for by corporations that directly benefit from the research result. This can interfere with the principles of scientific objectivity. For example, there have been cases of sponsoring corporations keeping negative results a secret. Even the best intentioned research can be confusing. Dr. Jan Huizinga (Department of Medicine, McMaster University) studies the human stomach. He believes it’s possible that there may be components of garlic that get through the digestive process intact and can be effective in the human body. He cites studies where the evidence of garlic’s effect appeared to be weak. However, deeper analysis of the research results revealed that a subset of the participants actually showed a significant

garlic. But their results were snowed under by the other participants. And then there are small studies in which an effect was shown, but this is critiqued by lack of rigor because too few patients were studied. Huizinga suggests that while the beneficial effects of garlic might not apply to everyone, it might help those with a particular biological makeup. 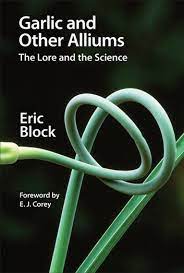 Science and the Benefits of Garlic

Science simply may not fully understand the benefits of garlic. Harvard-trained chemist Dr. Eric Block concedes that “medicine is not just about molecules. It’s also about the psychology of feeling positive, which stimulate the biomolecules that help healing and come from following your grandmothers’ advice.” While the jury is still out on just how effective is garlic in curing and treating illness including the common cold, there’s no harm in taking a clove or two per day. In the meantime don’t ignore your doctor’s advice.

If you want to take garlic for medicinal purposes but prefer it in a capsule form, freeze-dried garlic is preferable, as it will retain as much as 80 percent of the allicin content. That’s according to Chung-Ja C. Jackson, PhD. Dr. Jackson studied garlic at the Guelph Centre for the Functional Food, Laboratory Service, University of Guelph.