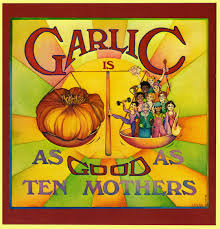 Films are screened in the Festival theatre during Festival hours. Access is free with admission to the Toronto Garlic Festival.

It was filmed at the Gilroy Garlic Festival in Gilroy, California, as well as in other locations in Northern California. Its official premiere was at the 1980 Berlin Film Festival.

“This is Les Blank’s most gastronomically obsessional film portrait yet. An exhaustive, lip-smacking foray into the history, consumption, cultivation, and culinary and curative powers of allium sativum, the film lingers in the disparate kitchens of Chez Panisse and Flint’s Bar-B-Que in Berkeley, and Truckee’s paradise for lovers of the stinking rose, La Vieille Maison. There’s a piquant stop at the first Gilroy Garlic Festival, pertinent asides by Werner “I’ll eat my shoe” Herzog, and performances of Cajun, French Provincial, Flamenco, Swiss Italian, Moroccan and Mexican music.” — Robert DiMatteo, San Francisco Bay Guardian