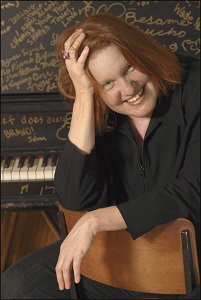 Stella is currently writing a one woman comedic musical: Stellavision – the 3 D World of Stella Walker.

As a writer, performer, producer and singer Stella has many national broadcasts to her credit. Her work as a writer and performer has been broadcast nationally on the Comedy Network, Women’s Television Network, CBC, CTV, and Bravo!

For the Canadian Broadcasting Corporation, Stella wrote and starred in an episode of COMICS! shot in Toronto and at the Just for Laughs Festival in Montreal.

She reported on media and technological trends on the CBC TV show Undercurrents in commentaries.  Stella posed as a pundit on CBC’s Straight from the Hip and Not Just the News, and chatted on Open Mike with Mike Bullard where she was alternately charmed by Mike Bullard and alarmed by a boa constrictor.

Her absurdist style of comedy involves multiple characters, primitive sight gags, music both original and derivative, elegant vaudeville, and cardboard props – earning her the title “The Goddess of Oddness”.

Her work has been broadcast on CBC Radio’s Brave New Waves, RadioSonic, Sunday Showcase, Morningside, Radio Noon, Definitely Not the Opera, Later the Same Day, Realtime, and Madly Off in all Directions.

​For writing and presenting works for the stage, Stella has received grants from The Canada Council for the Arts, The Ontario Arts Council, and The Laidlaw Foundation. Works include an opera libretto Sirens and her first one woman play – The Goddess of Oddness Investigates the Science of Romance directed by Andy Jones. She appeared as Trix the Aviatrix in the hit musical The Drowsy Chaperone at Theatre Passe Muraille.

In association with Insight Productions, Stella produced and starred in The Merman-Off, a one-hour comedy special for the Comedy Network. The over-the-top tribute to the spirit of Ethel Merman features 23 performers and a singing dog. Her short Hydro Wire Girl aired on the Comedy Network’s Canadian Comedy Shorts.

Stella makes a brief appearance in the Rhombus Media television show Slings and Arrows and can be heard warbling on Nancy White¹s C.D. Stickers on Fruit. She harmonized with her mother Lillie on the soundtrack of the award-winning film A Feeling Called Glory and wrote lyrics to new jazz compositions with her father – jazz drummer and business maverick Mickey Walker.

Originally from Vancouver, Canada, Stella began voice study with Agnes Stieda at age 16, continuing with Dr. Jacob Hamm, and later intensively with Lucia Constantinescu. Stella sang four seasons in the Vancouver Opera chorus before moving to Toronto in 1993. Stella sings in many languages and is an expert voice coach, specializing in repairing damaged voices.

Stella has specialized in Jewish music, particularly Yiddish art song. She has worked with North America’s best musicians and premiered works by Srul Irving Glick, Helen Greenberg and Beyle Schaechter Gottesman. Stella has worked with many singers and Klezmer bands including Dave Wall and the Flying Bulgar Klezmer Band and Beyond the Pale.

Stella was a member of the professional choir at Beth Sholom Synagogue for a decade, under the direction of Brahm Goldhamer, with Cantor Eric Moses. She has studied cantorial music with Cantor Maissner at Holy Blossom Temple with support from The Toronto Council of Hazzanim and the Art Vogt Memorial Scholarship for Voice. Stella studied with Cantor David Rosen at Beth Radom in Toronto where she had an opportunity to lead services. Jewish studies with Frieda Forman.

Stella studied the Cree language at the Carnegie Centre in Vancouver, then at the Native Canadian Centre of Toronto, where she studied N & L dialects, volunteered, was an Elder’s Helper and substitute Cree teacher. In July 2012 she attended Cree Immersion through First Nations University of Canada at University of Saskatchewan in Saskatoon, studying the Y (Plains Cree) dialect.

Stella was one of 24 artist educators from across Ontario to participate in a pilot Artist Educator Course – an Indigenous perspective on arts education, with the support of elders, the Royal Conservatory of Music, The Ontario Arts Council, and the Debajehmujig Theatre Group on Manitoulin Island in May 2014.

She is writing an illustrated memoir: Plastic Squeeze-Toy Carrot. Claims that she is learning to play the clarinet have been investigated and have proven false.

Stella’s first show biz appearance was as the poster girl for Taffy Toppin’, a product you may have seen in the dairy section of your neighbourhood IGA in 1966. Her life story includes surviving a bohemian childhood, leaving home at 17 to work in a silver mill in Keno City, Yukon, a stint as a cook’s helper at an oil rig in Alberta, sailing a 42′ catamaran off the West Coast built by her French ex-husband, working as a Customs Inspector, and manning the emergency phone lines at the R.C.M.P. Stella was security-cleared to the Secret level.

Her show biz low point – at the Pacific National Exhibition, she played Diamond Lil accompanied by a mechanical guitar-playing pig. Judged “too operatic” by her boss, she was fired. It was all uphill from there.

In her next life, Stella will re-appear as a male accountant – family man Bob Smith, with a happy home life and delightful hobbies such as model trains and bird watching.

Member of the Women’s Art Association of Canada.