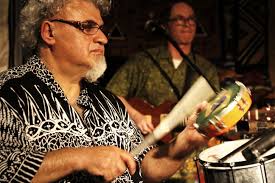 RICK SHADRACH LAZAR (drums, percussion) was born in Thunder Bay, Ontario, Canada. He is descended from the ancient Assyrian people & his Middle Eastern musical roots can be heard in his Afro-Latin-New World Fusions. His knowledge of world drums and music combined with passionate energy have made him first call for a diverse array of artists including Bruce Cockburn, Barry White, Paul Shaffer, Brian Hughes, The Blues Brothers, Levon Ichkhanian, and Vuja De, as well as being a regular collaborator (since 1990) with Loreena McKennitt on five of her CDs, including the JUNO Award-winning The Visit and Book of Secrets which reached #1 on Billboard Magazine’s music charts. He was also part of McKennitt’s 1998 European and North American Tours.

Lazar received his first musical instruction on piano and woodwinds from his father in his hometown of Thunder Bay, Ontario, getting seriously into the pursuit of drums and percussion instruments in high school, soon co-leading a band with good friend Paul Shaffer. After graduating from Lakehead University, he studied percussion at Indiana University where he became a member of the famed school of music’s renowned University Jazz Band. After university, he played with innovative funk and fusion groups throughout the mid-west, and toured the United States as percussionist with Barry White’s Love Unlimited Orchestra.

Returning to Canada, Lazar established himself in Toronto, performing with jazz fusion band, Manteca, and doing a variety of record dates, film sessions, and jingles. In the early 80’s, Rick formed Coconut Groove, a high-energy dance band featuring ground-breaking “World Beat & Jazz Rap”. In 1987, he formed the Montuno Police six piece instrumental band dazzling audiences in at the Toronto and Montreal International Jazz Festivals and releasing three critically-acclaimed CDs with them. He is also the creator and artistic director of Samba Squad, a dynamic group of 30 percussionists, forging new traditions in Brazilian “batucada”

As a dedicated educator, Rick Lazar is on the faculty of Toronto’s Humber College where he instructs in Percussion and Latin Ensemble Performance.