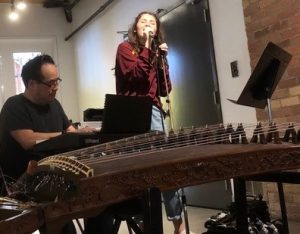 Donald Quan – Born in Toronto and schooled at the Berklee College of Music in Boston, Quan was the recipient of the Joe Venuti scholarship for stringed instrument performance. After Quan left college, he ventured into pop/rock music with the Canadian rock band Lighthouse and played with them for three years.

In 1988 Quan joined the Canadian rock group Eye Eye as a keyboardist and violist. He also performed as a multi-instrumentalist with the performance artist Meryn Cadell, the Celtic-rock band Enter the Haggis, alt-rock band Cliché Verre and Juno nominated Afro-Canadian pop ensemble Kaleefah.

Quan has been a long-time band member of Canadian singer Loreena McKennitt and has assisted in the production of several studio albums and recordings including the acclaimed The Book of Secrets.  Quan collapsed on Saturday, August 8, 2009 playing keyboards with Derek Miller in Kitchener, Ontario for the Kitchener Bluesfest when he collapsed onstage. He was later said to be in stable condition. Since 2007 Donald Quan’s music shop of musical instrument curiosities MUSIDEUM has become known as a premiere concert venue for all genres of music from all over the world