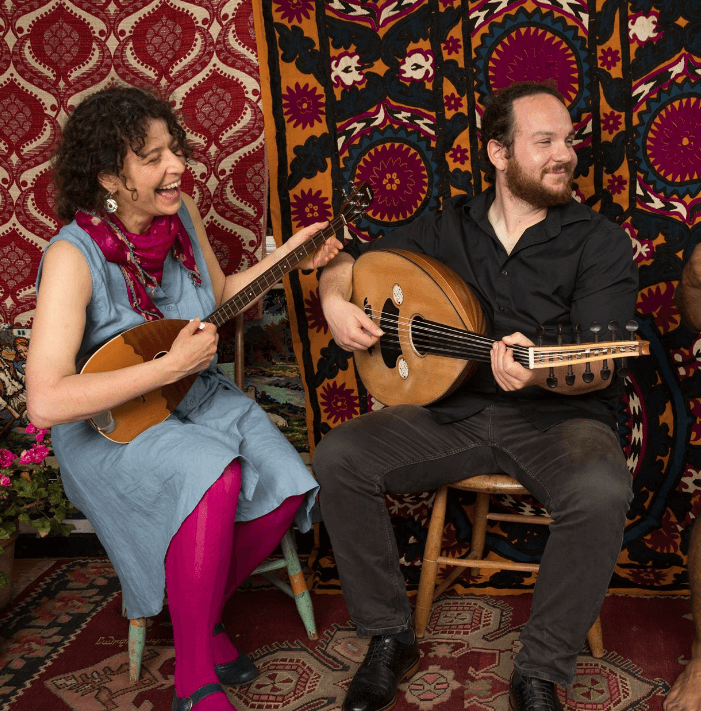 Always intrigued by scratchy 78s and strange ghostly sounds, Brenna MacCrimmon first heard Turkish and Balkan folk music in the vinyl collection of her local public library in the early 1980’s. As a result she embarked on a slow and inexorable descent into the world of Turkish and Balkan music. In Toronto, she worked with local Turkish and Macedonian ensembles before eventually deciding to “go to the source” and learn more about the music and the cultures that produced it. She spent a year as a guest student in the folk music division of the Turkish State Music Conservatory in 1985-86. Back in Toronto she continued to work with community groups and lead the Altin Yildiz Orkestar – arguably Toronto’s first Balkan-Gypsy Band. In 1995 she returned to Istanbul with the intent to sojourn for “six months to a year”. That stay lasted 5 years. While she loves all types of Turkish and Balkan music, she was drawn to the points where that music overlaps in Turkish musical culture. During her years in Turkey she was most fortunate to work with and learn from many wonderful traditional musicians, clarinetist Selim Sesler and accordionist Muammer Ketencoğlu among them. Not a strict tradtionalist, she has also frequently collaborated with Baba Zula, a Turkish Psychedelic Folk Art Rock band. She has recorded several times with the aforementioned musicians, has appeared as a guest on many albums and film soundtracks in Canada, the US and Europe and has released her own recordings to critical aclaim abroad. She is a featured performer in “Crossing the Bridge’’, Fatih Akın’s 2005 documentary of the Istanbul music scene. Her theatre work includes musical director of the multiple award-winning Volcano production of “Goodness”. In 2010, she found herself in Moscow as a member of the cast of “Bobble” with Bobby McFerrin and in the summer of 2011 she toured across Europe with Balkan beat DJ Shantel and the Bucovina Club Orkestra. She has taught Turkish and Balkan song at workshops across North America, in France, in Turkey and in Japan.

These days she is often found singing and playing songs of the Eastern Mediterranean with Jayne Brown, Sophia Grigoriadis and Maryem Tollar as Turkwaz, or with Zephyr (Demetri Petsalakis and Jaash Singh), learning and singing old blues songs with pianist Bill Westcott, keeping a ukulele session going, thinking about poetry and reading a lot about shadow puppets, The 1001 Nights and snakelore. Other recent projects include a retrospective of influential Turkish song-writer Fikret Kızılok with Toronto musicians Jack McRae and Deb Sinha, an electro-acoustic mélange of Turkish and Greek songs with Berlin trio Alcalica, a high spirited two-person Hootenany with Toronto singer Alan Gasser.

A 2015 recipient of a Chalmers Fellowship has allowed her to delve into her murky ancestry of Scots. Something will come of all that, to be sure.

Originally from Athens Greece, Demetrios Petsalakis is a Toronto based musician performing in a variety of styles with a focus on Greek and Middle Eastern lutes. He is involved with bands such as Ventanas, Nomadica, Near East, Zephyr, The Maryem Tollar ensemble, Samba Squad, The Ken McDonald quartet and the Heavyset Quartet where he is featured playing a variety of stringed instruments including guitar, outi(oud), lyra and baglama. Demetri has a Master of Music degree in jazz guitar performance from the University of Toronto, and a Bachelor of Fine Arts degree in music from York University.