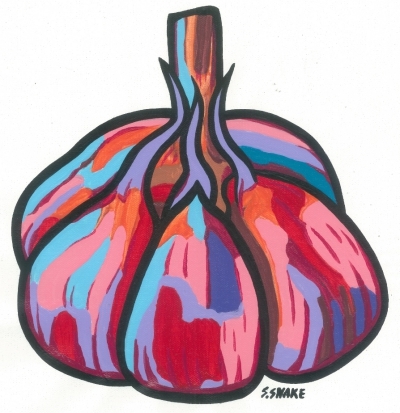 Posted at 21:37h in Uncategorized by admin
0 Likes

Every year the Toronto Garlic Festival  re-imagines the garlic bulb in a new and creative way for the Festival’s advertising campaign.  In previous years we hired artists and graphic designers to depict a garlic bulb abstracted as a scoop of ice cream (2013),  a hot air balloon (2014),  a globe of  the world (2015) and, as a light bulb (2016). For the 2017 Toronto Garlic Festival advertising campaign we commissioned artist Stephen Snake to paint a garlic bulb in his own distinctive impressionistic style.

Stephen Snake was born on the Chippewas of Rama reserve near Orillia, Ontario in 1966. A self-taught natural born artist, Stephen’s gift was recognized at an early age and encouraged by his mother Carol Shilling. Arthur Shilling, a cousin of Carol, became a strong influence on Stephen’s direction as an artist.

His first show was in 1989 at the Woodland Cultural Centre in Brantford, Ontario. Stephen has had several exhibitions since then, solo and group shows, and his work can be found in many private and public collections throughout the world. His early works are in the Orilia Chamber of Commerce, Chipppewa’s of Rama Band office, Royal Ontario Museum in Toronto, Ontario and the Canadian Embassy in Hungary.

In the spring of 1991, Stephen was fortunate to meet Norval Morrisseau, another great influence in his life’s work, and in 2008 he painted an oil portrait of Norval. The painting was slated to be part of a future solo exhibition but the Maslak gallery acquired the portrait for their permanent collection. This portrait hangs in the Maslak Gallery in Yorkville, Toronto, Ontario and is featured on the website of the Norval Morrisseau Family Foundation.

The Woodland style of painting that was introduced to the world by Norval Morrisseau is being carried on in Stephen’s works that he enjoys painting. Stephen has a studio in Rama and one on Bear Island, Lake Temagami where he paints majestic landscapes of the north with his own distinctive, impressionistic style that resonates the Spirituality of the land.