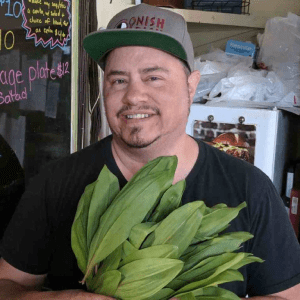 “This Is How We Brunch With Garlic”

Chef Ringuette joins Chef Donna Dooher in their virtual demo, “This Is How We Brunch with Garlic (Garlic Herb Biscuits and Indigenous Dish with Garlic)

Chef Johl Whiteduck Ringuette is Anishnawbe and Algonquin, a descendant of Nipissing Nation and from the Mink Clan. He is the proprietor of NishDish Marketeria & Catering, a Native owned and operated catering business specializing in Anishnawbe cuisine since 2005. In April 2017 when NishDish opened its public kitchen doors, a new record was set as the most attended grand opening of any restaurant in the history of Toronto, which CBC documented, where over 800 people attended the tiny café space for 20 patrons to celebrate.

As one of Tkaronto’s leading First Nations food sovereigntists, Johl’s journey has led him to identifying, sourcing, re-learning and reclaiming the traditional Anishnawbe diet. His unwavering commitment to this vision has broadened his work beyond the Marketeria. As a public speaker in demand and teacher, he has taught countless traditional food skills, demos, workshops and medicine walks. Johl has written curriculum for his own Ojibiikaan Indigenous Culinary Arts Program in 2017, a ceremonial in-depth land and food-based program. Gifts he received of ancestral seeds in 2016 started an extensive Indigenous seed bank that lead to establishing the four urban Indigenous teaching gardens now hosted by OICN.

He is the founder and Board President of Ojibiikaan Indigenous Cultural Network, (OICN) the first and only not-for-profit dedicated to Indigenous Food Sovereignty, preservation of culture and languages in the GTA. Johl’s vision is to inspire the return of ancestral lands back to the community for the purposes of growing Indigenous teaching gardens. He has mobilized leaders in his community to envision a focused Indigenous community district in Toronto, in the area encompassing Christie Pits Park, the Davenport escarpment, and down along the route of Garrison Creek (buried beneath Shaw St), where several Indigenous gardens have supported the return of our pollinators.

In December 2017 Johl founded the Toronto Indigenous Business Association (TIBA), renewing the pursuit of an Anishnawbe district for Toronto and building a strong coalition of Indigenous social entrepreneurs and business owners from its original inception in 2012. In Oct. 2018 he launched the first Indigenous Harvesters and Artisans Market (IHM) with multiple partnerships at the Bickford Centre, where he curated a series of murals painted by Indigenous artists known as the Red Urban Nations Artist collective (RUN). Johl received Aboriginal Businessman of the Year, TABA award in 2013, and is also an active member of the Toronto Food Policy Council committee since 2018.  As the only Indigenous representative he has spearheaded the first sub committee to take on creation of Toronto’s Emergency Food Preparation pilot.  @Nishdishmarketeria